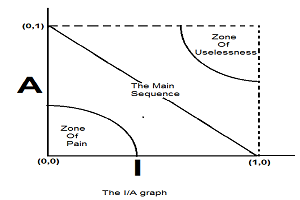 I recently read a book titled “Clean Architecture” by Robert Martin. It’s a comprehensive guide to software structure and design. This book presents must known SOLID principles and Component principles. The solid principles deals with how to arrange functions and data structures into classes, and how those classes should be interconnected. And Component principles tell us how to arrange different classes into different components and how those components are interconnected. I think understanding this is a must for anyone who is on the path of a successful software development career. In this blog I have shared some helpful insights regarding the component principles that I gained from reading this book.

What is a Component: A Component is a unit of Deployment. They are the smallest entities that can be deployed as part of a system. The granules of deployment like Jars, Gems, DLLs, Lib, EXE, etc. are known as components.

The Component Principles are divided into two groups:

Component Cohesion: It is the decision making about which class belongs to which component. Robert C. Martin has given the three principles to explain the same. We will see all these principles one by one.

Component Cohesion Principle Tension: From the above points, we realized that the three cohesion Principles tend to fight with each other. This is a tension between three principles that need to be resolved by a good software architecture.

The Tension Diagram for Component Cohesion: Below is the tension diagram that shows how the three principles of cohesion interact with each other. The edge of the diagram describes the cost of abandoning the principle on the opposite vertex. A good architect needs to find a position in above tension triangle that meets the current concern of the development team. He also need to be aware that those concerns will change over time. 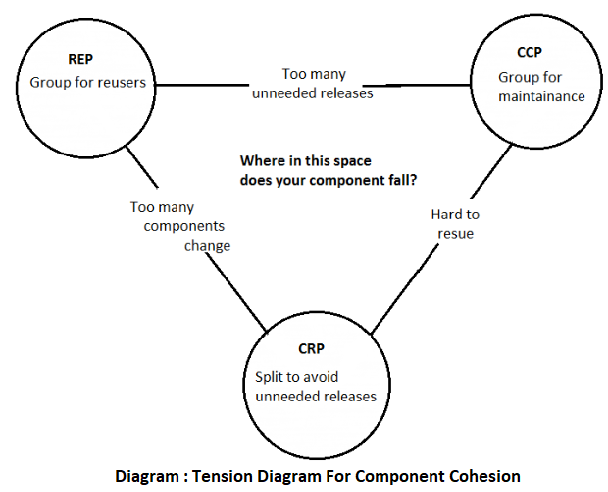 Component coupling: Coupling in software engineering is usually contrasted with cohesion and it is a measure of how closely connected two components are. Low coupling often correlates with high cohesion and vice versa. Low coupling is often a sign of a well-structured computer system and a good design, and when combined with high cohesion, it supports the general goals of high readability and maintainability.

3. The Weekly Build: It is Common in medium Size projects. It works, all the developers ignore each other for the first four days of the week. They all work on private copies of code and don’t worry about integrating their work on a collective basis. Then on the fifth day i.e on Friday, all of them integrate all their changes and build the system

4. Eliminating Dependency Cycle: Solution for the problem in the “Weekly Build” Scenario is eliminating the Dependency Cycle. Make a partition of development environment into release components. The component becomes units of work that can be the responsibility of a single developer or a team of developers. When developers get a component working, they release it for use by other developers. They give it a release number and move it into a directory for other teams to use. Then they continue to modify their component in their own private areas. Everyone else uses the release version. As new release of the component made available, other teams can decide whether they will immediately adopt the new release. If they decide not to, they simply continue using the old release. Once the team decide that they are ready to adopt the new changes then they hey begin to use the new release.

4. Stability Metrics: stability of component is measured by the number of dependencies that enter and leave the component Instability I=Fan-Out/(Fan-in +Fan-Out)

5. If all components in a system are maximally stable, the system would be unchangeable. This is not a desirable situation. Design component structure in such a way that some components are stable and some are unstable. The changeable components on top and depend on the stable component at the bottom. 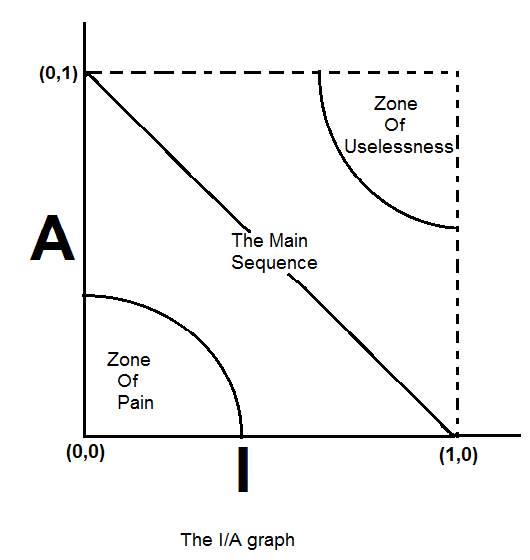 3. The Main Sequence: It is the relation between stability (I) and abstractness (A). Refer the below I/A graph.